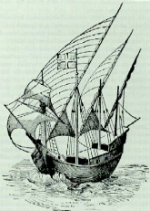 This Friday us lucky lot at Scrambled Messages held the first of our workshops. This one was on the subject of Space. In particular what do telegraphic technologies do to our understandings of space. There are lots of familiar old-adages of The World Gets Smaller variety. But really? Does it?

One of the texts we read and discussed in relation to this was an old-skool ANT piece by John Law (1986) about techniques of navigational control. (It’s here for those of you who might like to read it, tho be warned it’s proper old-skool-ANT clunky!)

It was written as part of a wider, anthropologically inspired discussion that was going on c.1986 about Power. It takes as its subject the development of Portuguese Navigation, the system which brought little old Portugal a vast and rather far flung empire. Law discusses what is meant by power and control and presents this as a vast network of heterogeneous things: ships capable of voyages far out to sea (the caravel, lateen rig, etc.); the developments in astro-navigation (sextant, star charts, etc.); and professional crewmanship (university taught) which allowed them to stay afloat and get where they were going. He sees this network as a combination of Documents, Devices and Drilled-people and argues that it performs Portuguese power over the ocean.

I know what you’re thinking. You’re thinking ‘what has all this 15th-century stuff got to do with the telegraph?’. Indeed. I’d argue in two ways. First, there are useful parallels to be drawn between the two sets of technologies. In the 15th-century ships are the method for effecting Imperialism. They facilitated trade, conflicts, colonialization, government, etc.. The Portuguese maritime world was the cutting-edge of imperial ambitions. There are parallels with the imperial aspirations for telegraph in the nineteenth century. The telegraph system can similarly be seen as a collection of Documents (such as code books, operators manuals, patent specifications, etc.) Devices (cables, keys, recorders, laying and repair vessels, stations, tools, insulators, etc.) and Drilled-people (clerks, linemen, engineers, financiers, newspapers, etc.). Both projects are supported centrally and designed to increase trade and control internationally. Second, and probably more usefully is that Law’s work does something really clever to space; it points out that it ismade, through the myriad efforts of all the Documents, Devices and Drilled-people.

And it’s this connection with the making that I find so useful for thinking about space and the telegraph. People experience space. The sensory, bodily movement through it is the means by which we appreciate it. As a human in possession of a perceiving body, space might therefore be almost directly substituted for effort. The oft-told tale of the telegraph ‘making the world smaller’ therefore seems to stem from the feeling that this effort has somehow been removed. Indeed, what effort is it to pick up the phone (or walk to the Telegraph Office) when compared to riding the overnight mail-coach, piloting the mail-packet round the Cape or indeed the marathon effort of Philippides! It feels smaller.

What Law does when reminding us of the workings of the network is to reveal the effort within things. And actually, by really thinking about what is essential to the telegraph network in terms of sourcing, processing and deploying materials we see that there is a phenomenal amount of effort going into the system. Copper miners and smelters in Chile; Jute retters and spinners in Bangladesh (unravel the hand retted jute contained within the Atlantic Cable and it would stretch to the Moon!); Gutta-percha collectors in the Malay Archipelago; rosin gatherers in the tupentining camps of the Deep South; Peasant tar-burners in Sweden; the ships circling the globe laden with raw materials and vast coils of cable; the army of layers, builders, instrument makers, cable winders, operators, linemen, engineers, clerks and telegram boys all mobilized so a particular person can press a particular button and send a particular message really quickly. The effort is not removed from space! The world is not made smaller in the placing of a telephone call. The effort is deployed in vast quantities, constantly remade larger and with wider and more varied connections than before. Effort laid bare like this dispenses with any easy rhetoric of a world made smaller.