In William Morris’s verse poignant situations arise from failed connections, producing the intense sadnesses of love.  He published ‘A Dark Wood’ in the Fortnightly Review in 1871 and included it under the title ‘Error and Loss’ in his final collection of poems Poems By the Way (1891).  The poem includes just three actors: the melancholy narrator who sits on the ‘leaf-strewn’ grass at the edge of a wood in autumn, a tearful maiden who stops to speak to him then turns into the wood and a sad man who the next day comes out of the wood and addresses him.  There is symmetry in this fable-like sequence. We can envisage the seated man as a junction point in a pattern.  The woman’s movement from meadow to wood is a pathway that we can imagine as a curve towards another junction point in the heart of the wood.  The man who emerges from the wood comes from that junction point in the opposite direction, we might say along an opposite curve, to stop at the seated man.

A number of Morris’s textile designs are based on a network pattern; they show junction, symmetrical divergence and then re-conjunction.  One example is Little Chintz (1876); another is Eyebright (1883).  In Eyebright each yellow flower corresponds to another yellow flower vertically above it, they are connected by the two arms of the white stems which travel out to left and right, and then rejoin passing through the node, on each side, of a single yellow flower placed at the widest point of the journey. 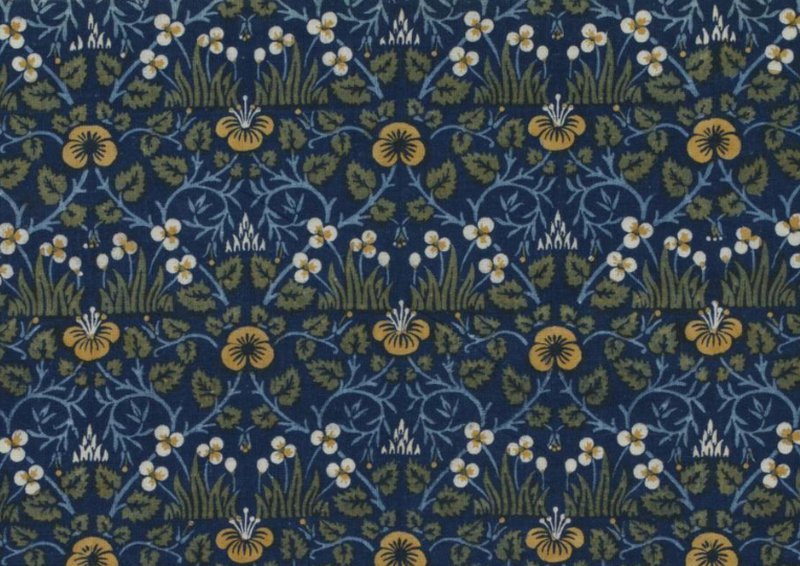 Each of those two nodes is the position where another splitting and rejoining occurs, and so the network multiplies the event across the whole extent of the fabric.

The burden of miserable loneliness that the seated man feels passes away from his own emotional core and is assimilated by the greater, more powerful grief of the woman who cannot find her lover.  His own emotion is carried from him like an electrical current as she goes into the wood to seek her partner.

Then ‘twixt my tears a maiden did I see

Who drew anigh to me on the leaf-strewn grass

Then stood and gazed upon me pitifully

With grief-worn eyes until my woe did pass

From me to her, and tearless now I was,

And she mid tears was asking me of one

She long had sought unaided and alone.

The sad situation described by the poem is that night falls and the two lovers pass by each other in the darkness wood without being aware of each other.  It is not that that do not meet; there is a junction point, but to no avail.  It turns out that they had ‘met and missed, in the dark night’.  When the man comes out of the wood in the morning he is grieving that he and his lover cannot find each other.  The emotion flows back into the seated man so that his original melancholy is redoubled.

Then midst my pity for their lost delight,

Yet more with barren longing I grew weak,

Yet more I mourned that I had none to seek.

Morris with his alertness to pattern-making sees that a side-node can convert to a central junction-point as the eye travels vertically and horizontally across the net.  Each actor can play the role of lovelorn or fulfilled lover.  The logic of the repeat and the various forms of symmetry means that any narrative role is not fixed.   An additional point that should be stressed is that it is central to his artistic project to recognise the equal potency of joy and sorrow.  This helps us to see that delight can be a plus, but intense sorrow can also be a plus.

The poem reveals that the paradoxical non-meeting (‘met, and missed’) is an allegory for misunderstanding caused by social convention with its prohibitions and the veiling of truth in romance.

A diagram of the poem would look like this

This blog entry is part of the Scrambled Messages enquiry into motifs of non-communication (or thwarted communication) in cultural forms.  It raises the question of whether the transfer of emotions and the variation in the emotional state of the narrator in Morris’s poem can be considered in terms of electrical charge.  The comparison that I have made with patterns adopted by Morris & Co in printed textiles raises an additional question about the function of nodal points in a pattern.  Energy flow is directional in terms of the imagined vegetative forms and their biological growth.  Naturalism, insofar as it informs Morris’s design practice, requires the surging forward, or upward, of growth.  The context of successful and thwarted communication in ‘Error and Loss’ raises the possibility that the lines of the pattern and the points of conjunction might be understood in terms of communications technology and the electric cable.  Energy flow is reversible in this context.  Switches can be flipped. This might be important to consider in terms of the abstract geometries harnessed in pattern making which do not respect the presumptions of naturalism.