....over the horizon while soldiers lie dead and frozen, eaten by crows in Vasily Vereshchagin's huge (c.1.8m x 2.8m) oil painting, The Road of the War Prison 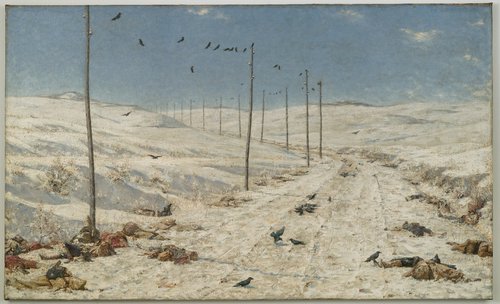 ers, painted in  1878–79.  I saw this picture in April when I was in New York for a conference and it has haunted me ever since.  The Russian artist Vereshchagin was working as a war-correspondent in the Russo-Turkish War. In the winter of 1877 he witnessed thousands of Turkish prisoners freezing to death while being marched to Russian war camps. In his angry painting the frozen corpses lie awkwardly where they fell  on the ground like heaps of unregarded matter, and they contrast unsettlingly with the aerial mobility and elegance of the telegraph line, and its mocking promise of communication and connection.  It is an eloquent reminder that despite the utopian rhetoric it often generated, (peace to all nations, goodwill to all men, etc.), investment in the telegraph was often motivated by military strategies, and its uses were often far from 'liberal' or liberating. Perhaps unsurprisingly, Vereshchagin was unable to sell the painting in Russia but in 1891 he sold this and a companion anti-war piece, A Resting Place of Prisoners, to collectors in New York who apparently identified the picture with the horrors of another war - the American Civil War.  Both paintings were donated to the Brooklyn Museum by Lilla Brown in memory of her husband, John W. Brown, and you can see them on display there in the Beaux-Arts Court, West, on the third floor.  I recommend it.