King’s College, London contributed items from the Wheatstone Bequest to an exhibition of 1876 designed to increase popular knowledge of science.  The Special Loan Collection of Scienti 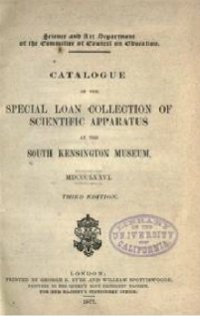 fic Apparatus was organised by the British Government under the aegis of the South Kensington Museum.  It was called ‘vast and important’ by The Popular Science Review.[i] There was not sufficient space for the more than 4,500 exhibits at in the main South Kensington Museum buildings so the exhibition was set up in the range of buildings on the west side of the Royal Horticultural Association Gardens adjoining Prince Albert Road.

From the outset the supporters of the exhibition had the idea that a permanent science museum could result from this display of temporary loans though, in the event, the independent existence of the Science Museum was not officially recognised until June 1909.  New buildings were constructed on the current site in the period 1913-28.[ii]  The exhibition of 1876 was marked by the decision to organise it primarily on the basis of topics of scientific enquiry rather than introduce geographical or national
Telegraphy featured in the West Courts of the exhibition building with light-house apparatus, mathematics, meteorology and astronomy.  Here was a compressed history: ‘the methods of science’ in electrical messaging had an abbreviated span in comparison to astronomy, for instance.  It was nonetheless presented as a history, with the inclusion of the early apparatus and instruments devised by Wheatstone (a number sent by King’s College, London), and subsequent elaborations and sophistications of the equipment.  subsections.  International participation

was secured by means of appeals and deputations to universities and institutions across Europe led by two key organisers the chemist Captain Edward Robert Festing and the astronomer Norman Lockyer.  Lockyer as founding editor of Nature was in a position to give the project ongoing press support.  The exhibition was explicitly set up to serve the common cause of knowledge rather than to promote individual companies.  It was not a trade fair, the organisers insisted.  As the Popular Science Review reported ‘for once, purely commercial interests have been made to give way to the “higher aim of disseminating as widely as possible a knowledge of the different methods of science”. [iii]  This did not preclude accusations of ‘jobbery, self-seeking and corruption’, as The Examiner indicated; the scientific world was said to be divided as to the merits of the exhibition, producing ‘bickering between camps’.[iv]  Scathing accounts of errors in the catalogue and omissions and deficiencies in the display were printed in the Athenaeum.[v]   By contrast, the monthly chemical journal The Analyst considered the effort to give the exhibition a non-commercial character largely successful.  It said ‘the advertising element so common to similar exhibitions has been greatly reduced, though not of course entirely eliminated’.[vi]  Success in this regard was due, in part, to the emphasis on history of science rather than an exclusive focus on current scientific achievements. 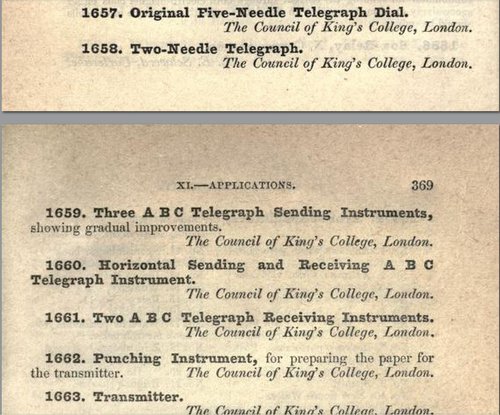 The telegraphic items were expected to be particularly popular.  The Academy claimed that the special collection sent by the Postmaster General to illustrate the history of electric telegraphy will attract general attention’.[vii]  Nature too picked out the Magnetism and Electricity sections (encompassing telegraphy) as a key attraction: ‘Sections 9 & 10 Magnetism and Electricity are likely to prove two of the most attractive, as they are certainly among the most important’.  In terms of the Scrambled Messages project the status of the telegraphic apparatus as especially prominent within the exhibition, as accessible exempla of scientific processes and principles, serves to confirm our assumptions about the cultural importance of telegraphy.  There was a spread of knowledge about the problems facing telegraphic engineers (and the scientific communities and manufacturers working with them).  Arguably this exhibition marks a step change in the level of knowledge and understanding available to a broad public.  The telegraph was not just a technology that came into use, thereby affecting the complexion of journalism, commerce, warfare and eventually private life.  Attention to its development also transformed the knowledge-base of a large segment of the public.  Exhibition goers, some of them ‘humbler dabblers in scientific lore, who consume the large editions of popular text books’, in the words of the Examiner, had the opportunity to consider the question of just how to combat injury or corrosion to the cable where the cable was in use, or the problem of ‘tremulous vibration’ where there was a need for a clear signal.  They were led to consider what means were available to counter electrical disturbance to the telegraph from the earth or from lightning and other meteorological phenomena.[viii] 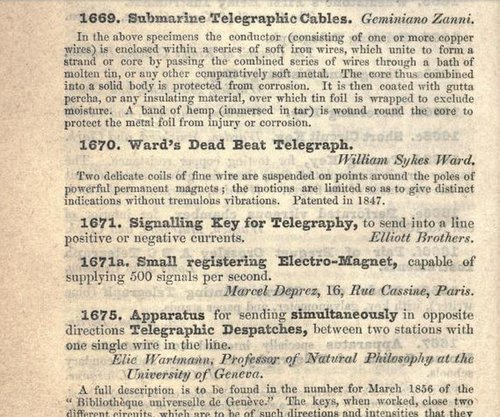 The knowledge imparted was about the kind of problem solving undertaken by scientists.  The exhibition as a whole ‘cannot fail to awaken a very general interest in those means of abstract scientific research of which the public know so little’, claimed the Academy.  The direct effects of the exhibition were amplified by extensive press coverage.  Practical demonstrations occurred at set times, and free lectures by eminent scientists were a notable feature of the exhibition.  Labels in the exhibition were barely adequate, critics said, but the information in the Catalogue was extensive and substantial essays by authoritative men of science featured in the Handbook.[ix]   Consistently good attendance at the lectures was noted.[x]  Expectations as to attendance may have been set unreasonably high by an implicit comparison with International Exhibition attendance; there were some indications of disappointment.  Nature recorded visitor numbers of 11,715 in the week ending July 15th 1876 which is not negligible.[xi]  The exhibition closed very suddenly in December 1876; apparently winter attendance had dropped off in comparison to the autumn and the economics of keeping it open were problematic.  Underlying issues about the future of the project including mechanisms for purchasing or seeking retention of exhibits, and housing them in the long term, were also involved.[xii]

In drawing attention to this exhibition Scrambled Messages questions the view of the Athenaeum which sneered at the way the daily press was ‘driven wild with enthusiasm’ over the exhibition.  For the embittered Athenaeum reporter the rather worthless exhibition was a collection of ‘brass, glass and old iron relics’.  An alternative view is that the ‘relics’ were historical items that stimulated thinking about process.  In the case of telegraphy the instruments 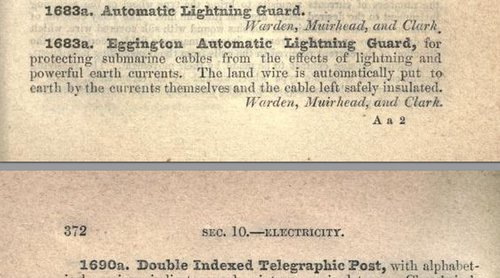 were drawn from an intense recent history of problem solving.  The mathematician William Spotiswoode commented on the ongoing conundrums and obstacles that faced scientists in the remarks he made when chairing one of the conferences associated with the exhibition.  The image he used was of cloudiness.  ‘Again, an Exhibition of this kind is useful in bringing to light the actual operations of the scientific world, the problems which have been solved and others which are still in a nebulous condition with just here and there a clue peeping out’.[xiii]  For the visitors to the exhibition the process of deduction was what was on offer, conceived of as starting from reduced visibility, relating to an apparently shapeless entity rather than the hard forms of brass and glass.

[xi]   Visitor total for a week at International Exhibition, early November 1862, was 319,041, http://archive.thetablet.co.uk/article/8th-november-1862/12/the-international-exhibition-closed-on-saturday-th