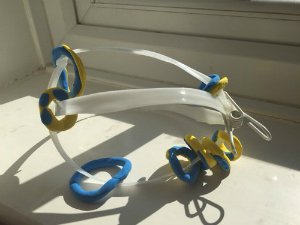 This is my model in air dough and extruded plastic of muddled seriality. I haven't had so much fun in ages.  Probably since about 1970, in fact.   I was one of the Scrambled Messages team who as asked to come up with a term from my own discipline that was difficult to communicate to other disciplines.  I teach English Literature and a term that is exercising me in my own research and writing at the moment is 'seriality.'  In my discipline, it is about the proliferation of serialised print in the nineteenth century - an explosion of part issues - by the 1840s everything is getting serialised, not just Dickens's novels, but recipes, science, Bibles, encyclopaedias. For me, this newly loud beat of the serial is significant politically too - the serial unspools forward into empty time - it is a form nicely adapted to modelling a Hegelian version of teleological history.  But I also wanted to think about the way serials don't necessarily stay orderly.  And that is what my model was about. The air dough rings are passing characteristics serially (in a genetic kind of way) so the yellow gets slowly bluer, but the serial is all muddled up in an echo of a double helix - not very convincingly because that hot plastic was really hard to work with!!  We talked in our group about how serials might be produced in orderly sequence but they don't stay that way for long once they are out in the world.  We talked about the economics of serial publication, which is always about taking a punt and floating an idea - lots of serials don't survive beyond the second issue in the nineteenth century - and we talked about distribution of content and scale.  My fabulous interlocuters were a naval historian, an archaeologist and an art historian.  They all had their own versions of seriality to offer - my naval historian talked about new modular designs for warships in the US navy where different modular kit is designed to be slid into a standardised vessel so ships can be quickly repurposed for different combat conditions. He then went and fossicked around in the Materials Library and came back triumphant with part of an aeroplane turbine grown from a single crystal and used it to talk to us about seriality and the affordances of scale.  The art historian came back with a pine cone -a rather beautiful example of seriality, risk and waste in nature. My archaeologist found a far full of tabs from fizzy drinks cans which he showed us were mass-produced and identical but all different according to how they had been used.  Some had done that irritating thing of shearing off the top of the can as you try to open it, some had been clipped off with clippers.  We talked about mass production and standardisation.  It was fabulous.  I was especially grateful to the naval engineer though - I think he might have been lured to this event thinking it was actually going to be sensible and about ships and cables.  I mean really about them.  It was game of him to hide his horror when faced with a roomful of Humanities scholars and to take a metaphorical leap with us. What I learnt was that it is true - as the great Prof. Miodownik tells us - that you learn differently by making stuff with your hands and objects can give you an entirely new way of thinking through concepts.  This was one of my favourite days - possibly ever!