The ‘cable themes’ of ‘Victorians Decoded: Art and Telegraphy’ (Guildhall Art Gallery, 20 September 2016 – 22 January 2017), resonate deeply with my own maritime family history. My father, Colin Cameron (1922-1983), was for many years master of the Burmah Emerald, a Burmah Oil Company (BOC) tanker that transported oil from Iran and the former British colony of Aden (now South Yemen) to Pakistan, India, Ceylon (Sri Lanka), East Pakistan (Bangladesh) and Burma (Myanmar). My mother and I joined him aboard when I was 12 weeks old and the ship was our home for nearly four years, until my father retired from the sea (‘swallowed the anchor’) in 1962. Among the treasured possessions that I inherited from the best years of his life, as he called them, are his sextant (snug in a custom-made mahogany box with brass fittings); his logbook, epaulettes and whistle; his essential brass paperweights (nothing stays in place at sea, especially papers when the porthole is open to the ocean breeze), and his equally indispensable, and disarmingly beautiful, silver cigarette boxes.

Sending a ‘cable’—a wireless telegraph—was the main method of ship-to-shore communication on the Emerald. Important messages would be given to ‘Sparks’, the nickname for the ship’s radio operator (after the “spark-gap transmitter”, the standard technology for the first three decades of radio transmission, 1887-1916). He transmitted them in morse code to the radio station at Portishead in Somerset, where they were translated and dispatched as printed telegrams.[1] It was a cable that notified our relatives in Scotland of my birth in Calcutta. 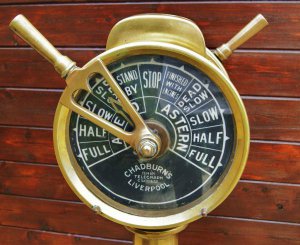 The exhibition’s focus on the transatlantic telegraph as the primary object of investigation reminds me of another sort of telegraph that is worth mentioning in the context of this collaborative investigation involving signals and codes. The Burmah Emerald’s ‘Night Order Book’ details the standard and emergency arrangements for night watch on the bridge (the ship’s control room). The officer in charge was personally responsible for communicating manoeuvres to the engine room using the Engine Order Telegraph (EOT), which was one of the most important mechanical instruments on the bridge. It consisted of a round dial with a central knob attached to one or more brass handles (one handle per engine). Moving the handle to a different position on the dial would ring a bell in the engine room and automatically move their pointer to the position selected by the officer on the bridge. The engineers would then adjust their handle to the same position to signal their acknowledgement of the order and change the ship’s speed accordingly.[2] Typical orders were ‘Full Ahead’ (for open water) and ‘Dead Slow Astern’ (for manoeuvring in narrow channels or preparing to tie up at a quay). Chadburns of Liverpool pioneered the system from 1872, taking out many patents.[3]

I am extremely grateful to Archie Munro for sharing his knowledge of ships and his memories of life aboard BOC tankers. Archie explains that in those days the EOT operated mechanically, by means of a chain similar to that on a bicycle, which dropped vertically from the bridge and traversed the ‘flying bridge’ (the area of a ship that offers unobstructed views fore and aft), before descending again to the engine room. Modern electronic EOT systems connect directly to the engine room controls, bypassing the need for action by engine room personnel. The purpose and action of the system is entertainingly illustrated in a clip from The Key (Columbia Pictures, 1958), which is a British war film set in the Atlantic, based on the 1951 novel The Distant Shore by Jan de Hartog, starring William Holden, Sophia Loren and Trevor Howard. 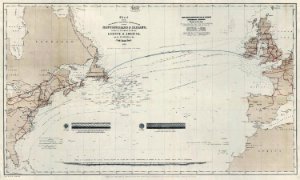 There are many marvellous items in the exhibition, but one in particular seems to me to encapsulate the spirit of the transatlantic cable project: Day and Son’s Chart shewing the intended telegraphic communication between Newfoundland and Ireland, tracks of steamers between Europe and America and the ice fields in the North Atlantic Ocean (with section of the bottom and of the cable to be used), 1856. The planned cable was, as the catalogue indicates, an idealised vision of the potential triumph of Victorian science and engineering over the geography and elements of the North Atlantic. The exhibition proposes that it was envisioned as a sort of gigantic hawser, capable of fastening the continents together, thus dispensing with traditional delays and hazards such as storms and drift ice, and the potential deviations caused by wind and tide. The metaphor has real resonance for me. A family cine film showing huge waves coming aboard our oil tanker, then spouting over the sides as she ploughs through high seas, is awe-inspiring (see below).

According to her log, the Burmah Emerald typically carried around 8,000 tons of cargo; although she would have been dwarfed by modern supertankers, she would have towered over the earliest sail-driven tankers produced on the River Tyne in the early 1860s.[4] At the foot of the 1856 chart, two massively enlarged lengths of spiral cable, also shown as symmetrical cross-sections, are printed decoratively but assertively over the profoundly chaotic environment of the open ocean. Girded with steel, they dominate the foreground, squaring up to Neptune and his sea monsters.

My father kept only one navigational chart, which he used for recreational sailing: Firth of Clyde and Loch Fyne (from Admiralty surveys to 1962), which was where we settled after India. The surrounding bens (peaks) are described in tight swirls and the tapering fingers of Loch Fyne and Loch Long reach deep into Argyllshire and Dunbartonshire. The chart is a thing of beauty and rich in history. Five ‘Cautions’ in small print include the following advice: ‘Submarines exercise frequently in the areas covered by this chart. A good lookout is to be kept for them when passing through these waters … Vessels are warned not to anchor in the area enclosed by pecked lines East of Dunoon, owing to the existence of submarine cables.’ The American Polaris nuclear submarine base, whose ominous presence was impossible to ignore, was operational in the Holy Loch from 1961-1992. The Post Office had cables in this area of the Firth before the First World War, but the West Highland Telegraph had submarine cables (made by Reid Brothers of London using Wheatstone’s telegraphic circuits) under the Holy Loch from around 1865.[5] The company was part of an extensive, privately financed network owned by the Universal Private Telegraph Company, whose 230-mile system included 5 miles and 30 chains (approx. 66 ft/20 m) of submarine circuits under Scottish lochs.[6] I had no idea, as we tacked up and down the Clyde in the 1970s, that we might have been sailing over remnants of those submarine cables.

Fig 1: The Burmah Emerald.
Fig 2: Playing in a hawser coiled in the ship’s bow. This massive cable—hot, bristly, hard with dried salt, smelling of oil and the sea—fastened our floating home to various pungent, teeming wharves from Newcastle to Rangoon (Yangon, Myanmar).
Fig 3: I am grateful to Ian Dutch for his generous gift of this print of the Burmah Emerald at anchor (at Budge Budge on the Hooghly River?), with local fishing boats in the foreground.
Fig 4: An Engine Order Telegraph (Photo: La Timonerie Nautical Antiques)
Fig 5: Day and Sons’ coloured lithograph, 1856.
Fig 6: Clyde charts (a), (b) and (c)