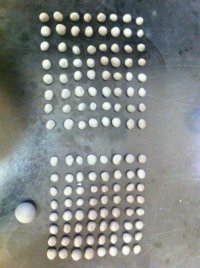 I liked very much Mark’s brief talk to us about the Institute of Making and the benefits of thinking-while-doing. It struck a chord with some of my own work into durational experiences of space. Tasked simply with ‘making’, I wanted to avoid trying to make a visual representation of anything we had discussed in the day so far and instead to use making to try to create some kind of bodily experience for myself. I had been in a group discussing serialisation, but we had widened the term to include consideration of ‘series’ and ‘sequences’ too.

I started with a little tub of Air Dough. I divided the contents of the tub into two lumps, not quite equal. With the first lump I tried, as fast as possible (Air Dough hardens in air), to divide it into 64 equal pieces. I did this by dividing it in two, then dividing

those pieces in two and so on, ending up with an 8 x 8 square of little balls of Air Dough that don’t look massively dissimilar from each other. The repetitive action and attempt at doing it quickly hurt my right arm and my lower back as I leaned forward over the table.

With the second group, I tried to make 64 equal pieces, but this time by gauging 1/64th of the whole in each little ball I made. It took just as long and didn’t cause me any discomfort, but the pieces are all different sizes – I thought I was making them too large and then massively over-compensated for it – and I had loads of Air Dough left when I finished the square.

What did I learn? That you can make really simple things in completely different ways that end up looking different, use totally different amounts of resources and affect your body in different ways as you do it. The two groups of little balls are analogous to various things – industry vs craft? – but ultimately they don’t represent anything, they just are the result of a tiny experiment in making that made me think about things slightly differently than when I started. A micro-success on a day of failure.