Henry James's late novel, The Ambassadors (1903), is the transatlantic story of the middle-aged Strether who is sent to Paris to find out what exactly is going on with Mrs. Newsome's son, Chad, in that dangerously sophisticated city.   What he finds there bewilders him.  “[I]t had t 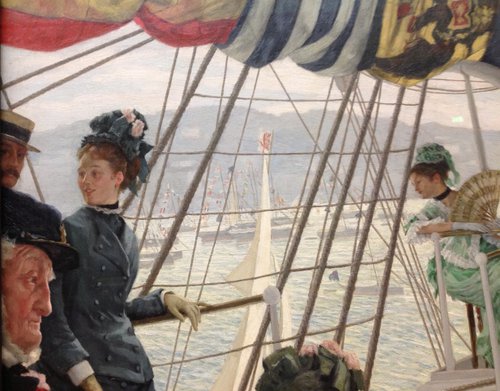 aken place, the process, somewhere deep down,” thinks Strether late in the book, and indeed it has.  A great deal of the ‘process’ has taken place along the Atlantic seabed in fact.  “[Strether] had a quick blurred view of daily cables, questions, answers, signals”: this circle is the underwater feedback loop between Woollett, Massachusetts, and Paris.  Towards the end of his discussion of things in Henry James, Bill Brown suggests that late James is, “striving for an effect that only subsequent technologies could fully realize.”[i]  He is both right and very wrong I think.  Brown has been discussing James’s curious animation of the inanimate in his The American Scene of 1907, but I would argue that technologies are already very much at work ‘realising effects’ in The Ambassadors and that James is fully aware of this fact and in control of it.  The electronic coded telegraph messages from Strether to Mrs. Newsome and from Mrs. Newsome to Strether pulse backwards and forwards across the Atlantic, compressed and coded, so they can be “tick[ed] out in four words” on the telegraph ticker.  But they can also represent attenuated extensions of bodily data, like the cable Strether considers sending when he first sights Chad:  “Awfully old—grey hair.”

In his Preface to the novel, James says Strether, as a narrator, was never to be permitted “the terrible FLUIDITY of self-revelation” through a first-person narrative, but is rather “encaged and provided for” in The Ambassadors.  The idea of Strether as encaged, of course reminds us of James’s most explicitly telegraphic of stories written a few years before The Ambassadors, In the Cage, and we can see Strether’s role as the puzzled mediator and transmitter of information, sending distorted, damaged and “copious” but partial messages back to Woollett.[ii]   “Again and again as the days passed he had had a sense of the pertinence of communicating quickly with Woollett--communicating with a quickness with which telegraphy alone would rhyme.”    Paul Gilmore has written that In the Cage “suggests the exhaustion of the telegraph as a source for aesthetic imagining of the potential of embodied connection across distance,” but I am not convinced by his argument.[iv]  James may not entertain technophiliac or utopian ideas about new technologies of communication but he is nevertheless undoubtedly interested in “the queer extension of…experience” by electric messaging.  The stretching of the underwater transatlantic cable and the pulsating compression of digitized transmission offered him a rich metaphor for the dematerialization and rematerialisation of the subject. When Strether fails to obey her cabled order to come back, “the current of [Mrs. Newsome’s] response had steadily run thin” eventually to cease altogether.  Strether, in a curious phrase, “had never seen her so soundless,” as her bodily presence materialises for him, “he had never so lived with her as during this period of her silence.... He walked about with her, sat with her, drove with her and dined face-to-face with her…the obsession sharpened his pulses,…[but] there were hours at which, to be less on the stretch, he directly sought forgetfulness.” His “pulses” – “on the stretch” – it seems that Strether himself is metaphoricised into the cable here, and Mrs. Newsome herself has become the message pulsating through him, a message suspended, like electrical signals, somewhere between a material and a ghostly presence.

When James writes with something approaching glee in the Preface to ‘The Aspern Papers’, that his goal was “to compress, squeezing it hard! – the connexion that had drawn itself out, and convert so the stretched relation into a value of nearness on our own part,” he could also be writing about the telegraphic style of The Ambassadors. It is telegraphic not just because of its moments of cable-speak and compression, although they undoubtedly form an important part of its pulsating rhythm as a narrative.  It is telegraphic because it is also stretchy and attenuated and attempts to throw its grasp across long distances of time and space.   “I find that the very most difficult thing in the art of the novelist” wrote James to a friend, “is to give the impression and illusion of the real lapse of time, the quantity of time, represented // by our poor few phrases and pages.” [v]  The speed and “quickness with which telegraphy alone would rhyme” is played contrapuntally against the slow parenthetic style which never ‘rhymes’ exactly, and often does something close to the opposite – forcing a diversion and a metaphoric veering off which slows and stretches the action of the novel.

For indeed, the ‘thing’ that we call ‘Strether’ in the novel is to some extent constituted by the copper and gutta percha of the Atlantic cable itself that tethers him and makes him ‘graspable’ from Woollett. His very name – Strether – seems to combine ‘stretch’ and ‘tether’ in such a way as to suggest his own attenuation. [vi] The unbroken flow of disembodied transatlantic communication through the cable in The Ambassadors and the constant clicking of the telegraph machines, underwrite Strether’s sense of the “queer concrete presence” of Paris, “full of mystery, yet full of reality, which he could handle, taste, smell, the deep breathing of which he could positively hear.”  The dematerialised messages from Woollett cause Paris to materialise all the more vividly and urgently for Strether who “only knew he was clutching his thread and that he held it from moment to moment a little tighter.”

In The Ambassadors, James explores the modern experience of ‘being transatlantic’.   He sees clearly the possibilities of the cable, a technology which is already functioning both materially and metaphorically within the culture.  The technical effects of cable technology are not only recognised in The Ambassadors as materially reorganising the symbolic world, but they are harnessed brilliantly to do James’s work for him.  Cable telegraphy disaggregates the process of communication, slowing it down and speeding it up in just the ways that James seeks to do in his late novels.  For in these proto-technological techniques of representation, James is deliberately revealing the practice and process of mediation.  He is making the machinery of realism visible, decoding and recoding it in front of our eyes, in order to show us that there is ultimately no space at all between the material and the metaphorical world.

This is an edited extract from my forthcoming article, ‘Henry James Tethered and Stretched: The Materiality of Metaphor’ in the Henry James Review. It was originally given as a Plenary Lecture at ‘The Real Thing: The Henry James Society Conference’, University of Aberdeen, 17 July 2014.

[i] Bill Brown, A Sense of Things: The Object Matter of American Literature (Chicago: University of Chicago Press, 2003), p.188.

[ii] Richard Salmon has described the way in which the culture and depth of Paris in the novel can never elude, “the gravitational pull of the material basis of its production, as Mrs. Newsome’s persistent telegraphic correspondence with Strether conspicuously demonstrates.”  Richard Salmon, Henry James and the Culture of Publicity, (Cambridge: Cambridge University Press, 1997), p.156.

[vi] I am grateful to Alexander Nemorov for this brilliant observation.