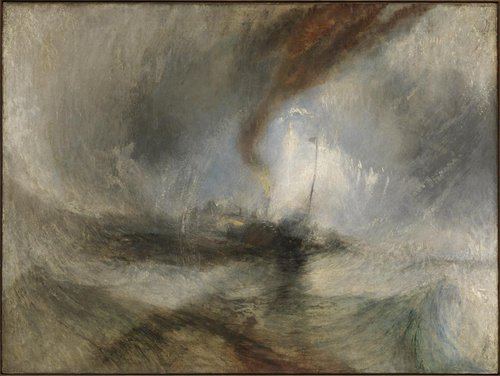 Is Gerard Manley Hopkins's The Wreck of the Deutschland  “the first telegraphically conditioned poem in English”?[1] Walter Ong in this description is referring quite literally to the telegraphed Times reports of the shipwreck which Hopkins consulted during the writing.  And Jason Rudy has more recently added to the idea by suggesting that “electricity was an especially helpful figure for Hopkins in negotiating what he saw to be an uneasy relationship between the spiritual and material worlds.”[2]

In 1875 and 1876 Gerard Manley Hopkins composed the first of his ‘sprung rhythm’ poems, The Wreck of the Deutschland, marking the stresses on his manuscript with blue chalk.  In his account of the ‘happy wreck’ of the Deutschland, a ship which foundered and sank off the Thames Estuary in December 1875, drowning, among others, five Franciscan nuns, he construed the oceanic  both as a site of accident and contingency and simultaneously as a site of divine providence.[3]  Isobel Armstrong claims that every Hopkins poem “must fuse thinking and feeling or, if possible, thought and sensation in an irreducibly concrete configuration of particulars seized as epiphany and oneness.”[4]  But the poet of the “piebald” and the dynamic “inscape” is perhaps less keen to achieve a ‘fused’ unity of form than this might suggest.  In fact, Hopkins’s idea of “instress” demands a wilful attention to the impossible contradiction and incommensurability of spirit and matter even at the instant in which they might appear to meet.

Hopkins imagines the deep ocean itself as a site which can both unbind the bodily and mediate between radically opposite forms of ‘history.’  The nun “Drowned, and among our shoals” is absorbed into the literal sea as a floating corpse among the fish, and into the spiritual sea as a part of the holy communion of souls.  Hopkins strains to invent a new form and a new rhythm for his poem by channelling the natural force of a storm at sea and in The Wreck of the Deutschland he forges a language which is designed to pivot excruciatingly between disaster and salvation.  So the snowstorm which drove the ship onto a sandbar on a December night in 1875 is twice vividly materialised. First:“Wiry and white-fiery and whirlwind-swivellèd snow/Spins to the widow-making unchilding unfathering deeps.”  And then once more:“Thou martyr-master: in thy sight/Storm flakes were scroll-leaved flowers, lily showers –sweet heaven was astrew in them.”  The contradiction stands unresolved.  The storm was terrible and disastrous, “widow-making.” Yet at the same time the storm creates a mediation between heaven and earth (represented by the trope of lightning elsewhere in the poem). “Is the shipwrack then a harvest?” asks the poet.  It seems a profane sentiment, but only because it flips spatial, temporal and eternal categories.

Hopkins forces both newspaper time and eschatological time into the very fabric of his poem in order to show the difficulties of apprehending God in the world:  “Since, tho’ he is under the world’s splendour and wonder,/His mystery must be instressed, stressed:” “[H]e is under”: The Wreck of the Deutschland organises itself in space between the depths of the sea and the heights of the skies to create a moment when heaven connects to earth, and what is both ‘under’ the world, but also exceeds the world, can become briefly manifest.  In other words, the poem uses space to talk about time, so that the sea resembles Byron’s sea inasmuch as Hopkins uses the depths of the sea to create a different scale of temporality which can unbind human history and reveal the smallness of the present in the perspective of both past and future.

This is an edited extract from my forthcoming essay, 'At Sea' in Time Travellers: Victorian Perspectives on the Past, eds. Sadiah Qureshi and Adelene Buckland, (Chicago: Chicago University Press, forthcoming early 2016).

[3] The poem’s epigraph is: “To the happy memory of five Franciscan Nuns exiled by the Falk Laws drowned between midnight and morning of Dec. 7th. 1875”