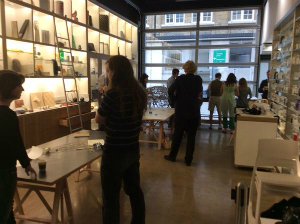 I was lucky enough to be one of the MA students invited to the Scrambled Messages ‘Non-Event’ at UCL’s Institute of Making on Monday 13th July. I had absolutely no idea what to expect. The event certainly lived up to its expectations, with students - both MA and PhD - post-doctoral researchers and academics of different disciplines split into groups, performing tasks ranging from sending a message from one side of the Atlantic to the other to analysing and defining problematic words with materials found in the centre’s ‘material library’. This certainly was no ordinary conference.

The day’s theme - failure - manifested itself in interesting and often unexpected ways. The first task - sending a non-verbal message from one side of the Institute of Making to another with only a box of miscellaneous items to help - became a failure for the event’s organisers by failing to fail. Every team managed to get some form of message across, which evidently was not the plan. On a slightly more personal note, it could also be considered a kind of failure for meriting speed over design. The team I was assigned to managed to create a two way messaging system. However, the set up took rather more time than expected, making us the second to last team to get our message across the figurative Atlantic, but with an arguably more technologically progressive contraption. It should be noted that this example of failure is in no way bitter nor born of longing for the prize of an Institute of Making ‘goodie bag.’

It was incredibly thought-provoking to hear about the problem of communicating across disciplines from a group who have been involved in interdisciplinary work. As we sat in discipline groups to discuss concepts that had been brought up during the course of the day, it was interesting to hear English Literature academics talk passionately about the importance of this subject. We discussed how working inter-disciplinarily had given a new sense and awareness of the skill of reading and analysing a text from an English Literature point of view. That the reading skill of an English Student is very different from that of an Archeologist or a Historian. Being interdisciplinary not only gave each discipline a glimpse into a wider framework of analysis, and how to read and think about texts differently; but also, certainly for the English Literature researchers, gave a firmer sense of what it is that they do as a discipline. This in its own way is an example of how failure is not always a failure. Though the meeting of different disciplines did not lead to an easy integration of narratives and academic jargon, the failure to communicate between disciplines lead to renewed sense of what each discipline is doing. Each reading texts differently, to different ends, but with equal success and validity.

On a final note, I would like to thank Anne Chapman and Clare Pettitt, for inviting me to join them from King’s College, London, and the organisers for creating such an original and stimulating event.