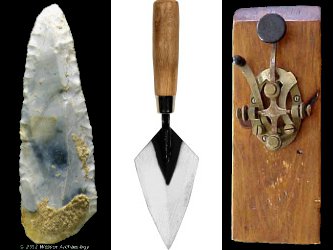 The time has finally come. I can put it off no longer. It is time to write up my thesis. It's tricky though, reading back over work that feels like a lifetime ago and trying to step back from all the fiddly detail that is thesis and thinking 'where is the book?' 'what's my big point?' and 'why would anyone read it?' (let alone buy it). It's ok for literary types, they can just bang out another biography of Shelley and be done with it ;-) . But is there really a market for an archaeology of telecoms? So what is my big contribution, my over-overview? Well, I think it's about technology and archaeology and how we do it badly. And, more importantly, how the archaeology of telecommunications can teach us to do it better. Let me explain.

Archaeology has, for the longest time been fundamentally about technology. It's a lot of what we dig up (ceramics, glass, textiles, etc.) because it is what has survived yes, but also because it is what people produce. Technology is how humans shape the world. It is the reason hairless apes can survive in the arctic circle. Technologies, furthermore, underpin the way we think about the past, (stone age, bronze age, iron age, etc.) and have been made to stand as markers from the journey from primitive (stone tool using) to modern (power tool using). It's neat. It's progressive. It makes sense. Except it doesn't of course, as anyone who has used a zippo lighter will tell you (it's a flint tool, yes?).

Archaeology, anthropology and telecommunications share many features in their gestation. Early, pioneering work carried out in the 18th century burgeoned into scientific disciplines in the third and fourth decades of the 19th and become established professions in the 1870s and 1880s. Both archaeology and anthropology work to create 'the other'; the other kind of people, the other kind of technology. The result of these efforts is that in the mid 19th century an intellectual wedge is driven between modern people and technologies (you, me, people with hairdryers) and ancient ones (them, foreigners, things that aren't electric). It is obviously an artificial divide but it remains one we still live with today (and as a researcher of things that happened after this wedge was driven in I for one have to justify my work in light of it on a daily basis).

Thankfully telecommunications technologies offer a blinding way to critique this argument. While archaeology was busy arranging the past into neat little sequences and anthropology was dutifully creating 'the other', telecommunications was busy undermining it all. For example, in the 1850s archaeologists were carefully typologising different kinds of stone axes. Anthropologists were busy documenting the people who still used them as 'survivals' from a primitive culture. And telecoms companies, meanwhile, were desperately buying up the materials produced with the same tools at a rate of thousands of tonnes per year. I'm thinking of course of the production of gutta-percha in Indonesia and on the Malay archipelago. There was nothing non-modern about it, or rather as good old Bruno notes 'we have never been modern'. There are lots of these kinds of examples and intersection which I'm hoping to bring together in the thesis/book/thing.

But telecommunications, archaeology and anthropology are bound together in so many other interesting ways. The laying of lines of communication led to the exploration of new lands, the discovery of new sites and people. Sometimes in very public ways, for example, a certain Dr Livingstone was in search of an over-land telegraph route when he was thrust into his adventures in Africa. Sometimes in private ones, the employees of the telecoms companies had to negotiate routes and maintenance through all sorts of territories, working alongside local men and women working the lines. All of this filters back, whether it be in the newspapers or the stories of Uncles, it feeds and orders the Victorian imagination in small ways and big, broadening horizons and fostering a receptive climate for archaeology and anthropology.

These are just a couple of jumbled early thoughts. But then, this is the first instance of pen to paper, or at least fingers to keys. Wish me luck!