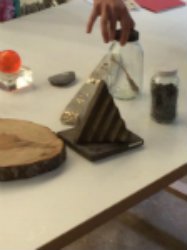 The Non-Event was a day exploring failures of various kinds, in honour of the unsuccessful transatlantic telegraph cable-laying attempt in 1865. Cassie and Anne had invited participants from a range of different disciplines, and we were put in mixed teams before being asked to carry out some unusual tasks, including a game requiring us to send messages across the studio and the challenge of representing a particular concept using objects that we had selected from the collection around us. Eventually we tried to represent our thoughts about the concept using a sophisticated kind of plasticine that hardens into a permanent sculpture. These efforts presented ample opportunity for various kinds of failure, as well as some surprising moments of articulateness and insight.

Our group attempted to represent the concept of modernity, a persistent, shifting and culturally loaded term that relies heavily on context, both because modernity always refers simultaneously to its opposite and because its meaning depends on the discourse within which it appears. It nevertheless remains useful and even seductive, in spite of the emergence and fading away of postmodernism. Other groups explored 'series', described using a collection of ring pulls, and 'narrative', conveyed through an impressively complex sequence of objects, including a radioactive cup and saucer from Mexico. I was struck by the proximity of series and narrative in terms of their material representation, particularly since the ring pull collection was presented to us biographically, each ring pull carrying its individual story in its form. The concepts and our interpretations of them all seemed heavily contingent on history and on time.

The final making of our thoughts in plasticine brought back memories of playschool, and reminded us that academic life tends to be mired in abstraction and disconnected from physicality, even for those of us whose primary focus is on material objects. At the end of the day, we came together to discuss failure. Our conversation suggested that failure is frequently a necessary part of an endeavour, but sometimes feels like a luxury due to external pressures. Failure can also carry a kind of appeal on its own terms, regardless of its part in the greater process. The reasons for the failure of the 1865 transatlantic cable were apparently misinterpreted. It did feel like a luxury to explore that moment, just before the transatlantic telegraph connection became a reality, both in itself and in relation to the successful cable-laying operation of 1866. We hope to celebrate that next year in more triumphal style.