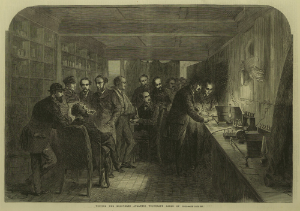 Charles Dodgson (who later took the pen name Lewis Carroll) entertained a flight of fancy about teaching.  He embarked on his academic career by tutoring a pupil at Christ Church, Oxford.  He understood the tutor-student relationship to be one where the distance required for authority and deference should be maintained and suggested that it could be represented in the form of the game traditionally known as ‘Whisper Down the Lane’ or (in the sinophobic designation) ‘Chinese Whispers’.  In a letter to his sister and brother in 1855 he set out the way a question and answer relayed between teacher and pupil would become distorted if physical distance intervened between the tutor in an upstairs room with closed door and the pupil humbly seated beyond another closed door down below in the yard.[1]  The message was to be relayed by those personal servants known in Oxford University as ‘scouts’.  A series of three were to be placed between tutor and pupil.  The fanciful scenario is based on a literalisation of the idea of emotional and psychological distance.  When the tutor called out his first and second questions “What is twice three?” and “Divide a hundred by twelve” the scouts passed the message on.  Each in turn mis-hears.  Comic confusion followed as the pupil apparently accused the tutor of being a ninny and the tutor apparently instructed the pupil to ‘deride the dunder-headed elf!’.  Indignity, offence, bashfulness and alarm are the emotions that paradoxically come into play in this system designed to maintain dignity and subdue emotion.

In telegraphy distance is similarly challenging.  1,600 nautical miles had to be bridged by the transatlantic telegraph: the full distance from Ireland to Newfoundland.  The communications errors that ensued bear comparison to the farcical miscommunication imagined by Dodgson.  The failure of the cable did not always result in an immediate cessation of signal.  As breaches in the line caused current to leak out and as electrolytic activity or temporary cladding of air bubbles temporarily resealed the cable, the signal wavered.  The transmission of messages was subject to the ‘jumbling effects of earth currents – those vagrant telegraphic pests’ as James Burn Russell an assistant of the engineer William Thomson phrased it in 1858.[2] Characterised in this way (as vagrant pests) they play a role akin to that of the scouts and sub-scouts of Dodgson’s fancy.

Some electrical engineers, trying out various remedies for the faulty cable and convinced that their technical solutions were helping matters, sought to interpret fragmentary of words or letters that appeared at the receiving station.  In this they were relaying the misheard just as Dodgson’s intermediate scouts sought to make sense of nonsense.  J. B. Russell saw the funny side of this.

The affective regime of nonsense is not that of polite or chilly emotional distance but of absurd uncoupling, surprising substitution, alarming collisions and illicit conjunctions, generating fear as well as hilarity.  The philosopher and cultural commentator Gilles Deleuze registers the grim world that Alice finds down the rabbit hole.

Reading Carroll’s Alice’s Adventures in Wonderland (1865) and Through the Looking Glass, and What Alice Found There (1871) we recognise that the proprieties of emotional distance are ruled out by the leaps and errors of the distances traversed (like the distance from tutor’s office to yard, involving discontinuities, demanding relay).  Alice herself cannot be aloof as she would like.  The buffets and bewilderment cause her pangs.  She is actually rather touchy.

I propose that we follow J. B. Russell in conceiving of the stuttering cable in physiological terms giving on to sensation and emotion.  He produces a rather laboured metaphor to express his pious belief that telegraphy will banish warfare.  The sentiment is a commonplace for the period but the imagery and language of his assertion are unusually intense. The passage comes right in the midst of his discussion of breaches in the cable and what he explicitly sees as the physician-like efforts of electrical engineers to restore the functioning of the cable.  The cable is envisaged as a neural pathway in the body of the world.

He is referring to literal slashing and mangling on the battlefield, but due to the position of this passage we cannot help but think of the breaches in the cable as producing painful stabs into a neural system.  The jumbled messages that are generated by slicing into the nerve/cable are agonisingly amusing, fearfully funny.

[2]   James Burn Russell, ‘Atlantic Cable: Leaves from the Journal of an Amateur Telegrapher’,  The West of Scotland Magazine and Review, New Series. Glasgow.  Published in three parts, in the issues of January, February, and July 1859. Consulted on website History of the Atlantic Cable & Undersea Communications from the first submarine cable of 1850 to the worldwide fiber optic network , http://atlantic-cable.com/Article/1858JBRussell/index.html  consulted 31st Jan 2016.  This item on the site has a very useful detailed bibliographic note by Bill Burns.  The published diary differs from the unpublished manuscript diary Glasgow City Archives ( Mitchell Library) TD1434/1 which is partly transcribed (by Mary Burns) on the site.  See Porthcurno Research blog 18 Feb 2011 by Allan Green on James Burn Russell (1837-1904) consulted 2nd Feb 2016.  All subsequent quotations from this document refer to the 1859 text from The West of Scotland Magazine (unpaginated as it appears on the website History of the Atlantic Cable).